A trained jazz musician, bandleader and DJ, Emma-Jean Thackray couldn’t find a home for herself and her music in more established jazz spaces, so she made her own: through her record label, Movementt, and her style of recording and performing, heard on her self-released debut album, ‘Yellow’. DJ Mag spent time with the Yorkshire artist to chat about her favourite outlandish auteurs, the sacrifices she makes for her art, and how she blends jazz, hip-hop, house and more to charming, psychedelic effect

A couple of hours into a conversation that has already covered Miles Davis, John Coltrane and Parliament-Funkadelic, Emma-Jean Thackray brings up Marcelo Bielsa, the eccentric manager of Leeds United FC. Bielsa is not a musician. Indeed, Thackray says that “he presents as someone who’s never even heard a record”. Yet his oddball, obsessive persona feels not unlike artists like Aphex Twin or Prince; the kind of character to which outlandish stories and bizzaro folklore cling with ease.

Legend has it, for example, that Bielsa once spent eleven straight hours at a barbecue discussing football strategy with a colleague. He is believed to own more than 7,000 VHS tapes of significant games, and to have cultivated the ability to watch two matches simultaneously on separate screens to optimise his time. Despite a huge salary, he remains uninterested in luxury, living in a one-bed flat above a shop and taking the bus to work. He’s fixated not just on winning football matches, but on winning them according to his specific, purist ideology.

Bielsa’s allure, as Thackray has it, is a combination of bloody-mindedness, neurotic genius, radical idealism and a pathological inability to compromise. That’s how he’s guided her beloved Leeds United FC up to the Premier League. “I love him,” she enthuses. “He spends all his time thinking about football, and I feel like that about music: it’s a 24/7 thing. I respect anyone who is so obsessed with something that they want to dedicate their whole life to it, at the sacrifice of everything else. I’ve sacrificed a lot, too. I find it incredibly hard to maintain relationships, because music comes first.”

Granted, a middle-aged Argentine football manager isn’t the most obvious prism through which to view a multi-instrumentalist, bandleader and DJ from West Yorkshire. Then again, Emma-Jean Thackray is not your conventional rising star: in our morning spent together, she tells us about the extreme sacrifices she makes in order to play music exactly how she wants, rejecting big-money record label offers to maintain complete creative control and even skipping meals to make shows work. “It’s worth it eventually,” she reasons, “because after the gig you’re so spiritually satisfied that you're like, ‘I’m hungry, but I’m sustained in this other way’.”

She performs not because she wants to be adored — “I’m not a look-at-me kind of person. I hate having my photo taken. Look at my mind instead! Open up my brain!” — but because it’s the purest way she can share her music. Any gains are reinvested into the multi-product Thackray music factory of live performances, recordings and radio shows. “People say that his teams are chaos, just attack-attack-attack,” continues Thackray, still on Bielsa, “but there’s so much more to it: different patterns are perfectly pre-planned, it’s just the illusion of chaos. And I think it’s the same with me. It sounds like I’m making it all up as I go along, but I’m not at all. I’m looking at the minutiae, all the time.” For Thackray, conformity be damned.

It all began conventionally enough, though. She fell for the trumpet as a teenager after seeing a friend playing one at school — “shiny, loud: yup, looks a lot of fun,” she remembers of her first impression — and then an inspiring music teacher showed her how to score the original tunes that kept popping into her head, alongside the Nirvana, ’60s jazz and ’70s prog that she was hammering on her Discman.

Then came the jazz course at the Royal Welsh College of Music & Drama, where Thackray also learned to sing and play guitar, followed by a relocation to south-east London to study at Trinity Laban, which thrust her into the creative centre of UK jazz music. Recent luminary graduates from Trinity include Nubiya Garcia, Moses Boyd and Ezra Collective.

Now a trained performer and composer, a career as a trumpeter beckoned, and Thackray dabbled in writing for big bands, but nothing felt quite right. “Just playing trumpet wasn’t enough for me,” she says. “I was making beats at home and bringing them into jazz combo stuff, and people would be like, ‘This is really weird, it doesn’t make any sense as a jazz composition, it’s a hip-hop kind of thing’,” she recalls, of early attempts to integrate her multiple musical interests. “And I’d be like, ‘Yeah, of course it is!’ But that meant I never fitted in, never felt comfortable.”

Not that discomfort was much of a problem for Thackray. Having grown up in the kind of featureless Leeds commuter town that thinks unorthodoxy is a procedure for straightening teeth, she was by now accustomed to being the odd one out. As a result, she interpreted her post-education ennui as a prompt to plough her own furrow. “The jazzers thought I was weird, beatmakers thought I was weird,” she remembers, “so it finally got to a point where I was just like, ‘Okay, this is who I am, this is what I want to do: whatever it is I’m doing, the process is coming from one root, and that has a name, so we might as well put that on the poster’.”

And with that was born the Emma-Jean Thackray of today, a target-marketer’s nightmare whose varied output includes not just her genre splat of nu-jazz, cosmic soul, house and funky psychedelia, but also experimental offshoots like the Sun Ra-meets-speed garage project Sub Ra, radio shows on Worldwide FM, club DJing, and her Movementt label, which is supported by Warp.

But if pinning down exactly what Thackray does has been an exercise in futility thus far, it’s about to get easier with the arrival of her debut album, ‘Yellow’. Hot, bright, dense and humid, it’s a perfect record for a summer afternoon in the city. It’s overspilling with groove and detail, but with dashes of melancholy and introspection flecked onto the otherwise joyful canvas, generating a pleasing three-dimensionality. Its expert pacing over 50 minutes adds to that depth, too. It’s something that Thackray says she became particularly consumed by, deliberately dotting little Easter eggs around the record to lure in repeat spins.

“EPs take care of themselves, but trying to maintain a trajectory over a longer period of time is a challenge,” she reveals. “There are subtle ways that I’ve tried to tie things together that hopefully aren't apparent on first listen. A couple of fragments are shared between songs that are in similar-ish places on opposite sides of the physical record. Little things like that — echoing, shaping a narrative — bring it together.”

What makes ‘Yellow’ most addictive, though, is that it’s the exhilarating sound of a gang of mates (who just happen to be virtuoso musicians) having a blast together, reminiscent in that respect of Masters At Work’s ‘Nuyorican Soul’: infectiously fun, meticulously curated and, crucially, full of life and liveliness. “It’s a studio album, sure,” says Thackray, “but it should feel like a live experience: you should be able to close your eyes and feel like a concert is happening.” And you can: studio circus tricks are notably absent, and instruments and vocals pop in and out of the stereo mix sometimes slightly (and charmingly) skewiff. The preservation of those quirks is, it appears, an aesthetic choice on Thackray’s part: “Nothing should ever be perfectly tuned — it makes things boring,” she asserts. “Never quantize. Never autotune anything. Capture the real thing, and if you’re singing a bit flat then you’re singing a bit flat.”

If this sort of adherence to dogma sounds like the approach of someone with a strict vision for her music, micromanaging the creative process to get everything just so, then it’s maybe unsurprising to discover that Thackray idolised Brian Wilson — arguably the godhead for her breed of idiosyncratic, driven, musically omnivorous auteur — during the making of ‘Yellow’. Sure, if you squint your ears, ‘Yellow’ has similar trouble-in-paradise vibes to the Beach Boys’ ‘Pet Sounds’, but Thackray’s Wilson-stanning is more about the how than the what.

“It’s the way that he approaches stuff I find a lot of resonance with: the arrangements and the production, rather than the actual musical content,” she explains. “He had this vision in his head he wanted to happen at the expense of everything, and I’m just doing whatever I need to make it happen here. I definitely feel like an auteur kind of character,” she says, with a laugh, “even if I’m not 100% sure what that means.”

For all the transcendent music that this approach can generate, though, history suggests it’s not always kind on the creators, something which Thackray also appears to feel as keenly as her heroes. “There's a lot of really hard, horrible times,” she admits about her practice. “And it’s tricky, because I feel like if I’m not working so hard that I might die, am I working hard enough? I don't know. My mental health definitely goes through phases — debilitating anxiety and panic attacks, a lot of intrusive thoughts — but ultimately it’s worth it to be myself. I never want to fit in anywhere for the sake of it. I’m happier on my own than to pretend.” 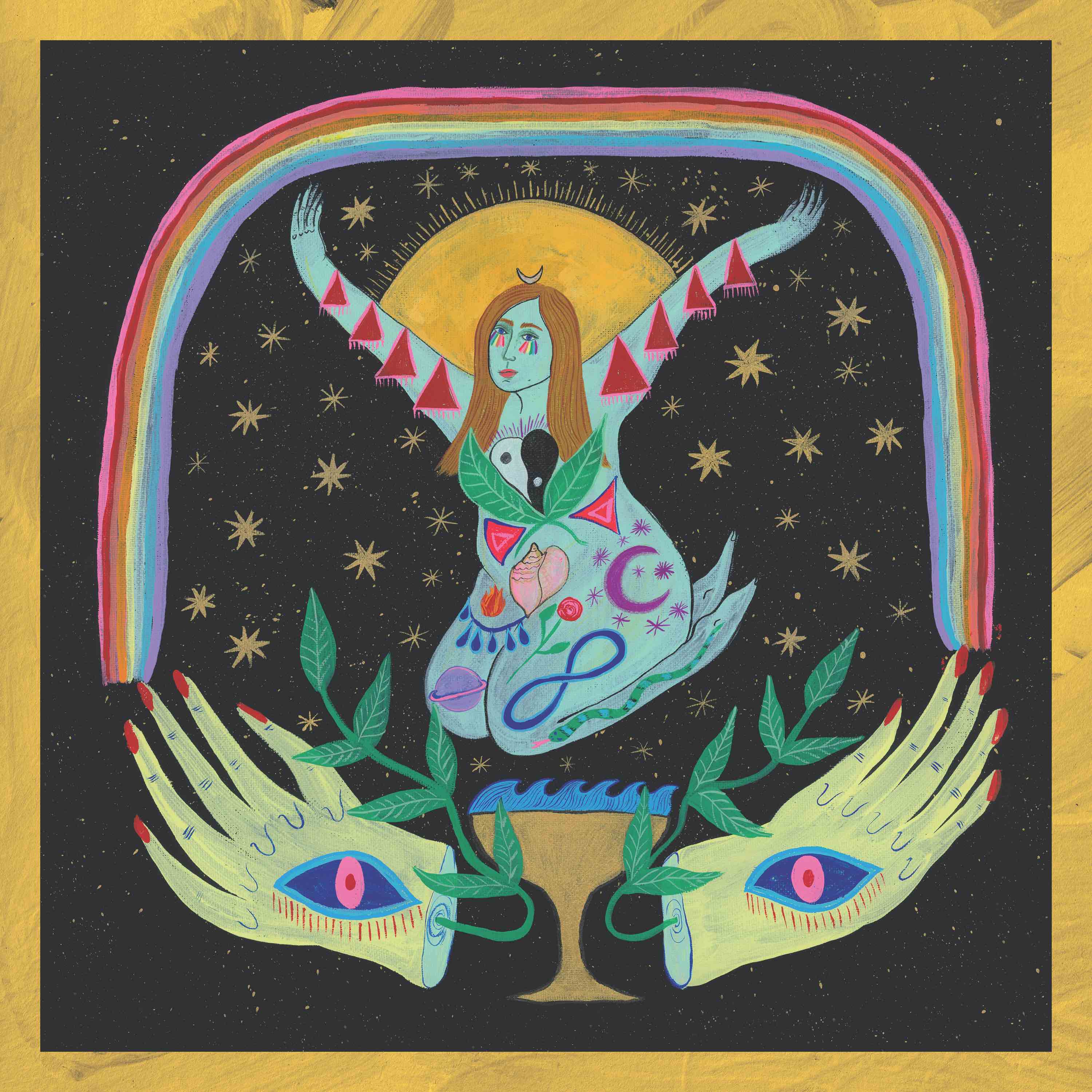 At one point during our conversation, Thackray compares her creative practice to a kind of tunnel vision, which figures: after all, with music like hers, which fits everywhere from sit-down auditoriums to sweaty clubs, a degree of inward-looking monomania must be essential. It’s also tempting to wonder, though, with such an all-consuming style and diverse output, who her music is actually for, beyond herself?

“I’m making it for people like me,” she replies, thoughtfully. “So, people who are a bit weird, outsider people, people who listen across a bunch of styles and who don’t belong in one gang. It’s for those people that feel dissatisfied if they’re just hearing one thing, that have the same kind of ADHD brain as me, of wanting to try lots of things or be excited by lots of different forms.”

That’s quite the misfit calling card. “I know!” Thackray smiles. “It’s like a slightly outsider dream, isn’t it? You won’t let me in your club, so I’ve made my own, and I’m inviting all the weirdos [to a place] where they don’t need to be anything other than who they are.” Even weirdo football managers? Thackeray grins, thinking of Bielsa and his comparable approach to running a very different kind of club. “I mean, I’d love that.”

Sam Walton is a freelance writer. You can find him on Twitter @SmWltn Features
Jazz but not jazz: the experimental fusion sound sweeping the UK scene